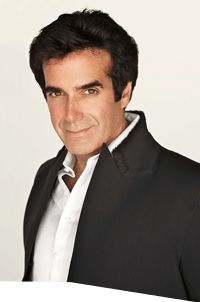 Magicorp Productions Inc. is honored to be the exclusive representative of all of David’s corporate performances. David has been hailed by audiences and critics alike as the greatest magician living today. Like Houdini before him, David Copperfield is the most well known and well respected magician in the world.

David is not one to rest on his laurels. His spontaneity and clear love of live performance are the result of his tireless commitment to his show and the field of magic.

“It takes at least two years to develop illusions and some of them even longer” says David. “I love to challenge my team and myself by pushing the envelope and working on new methods and ideas. I don’t always take the easiest route. Sometimes the ultimate solution requires months of brainstorming, miniatures and mock-ups, and testing just to make an idea reality.”

His awards are too numerous to count but some of the highlights include:

Nothing can replace the invaluable experience of performing daily in front of a live audience and having over 500 performances every year.

David has forever changed the future of his art and has shown that there are no limits: David Copperfield’s magic is as vast as the imagination.